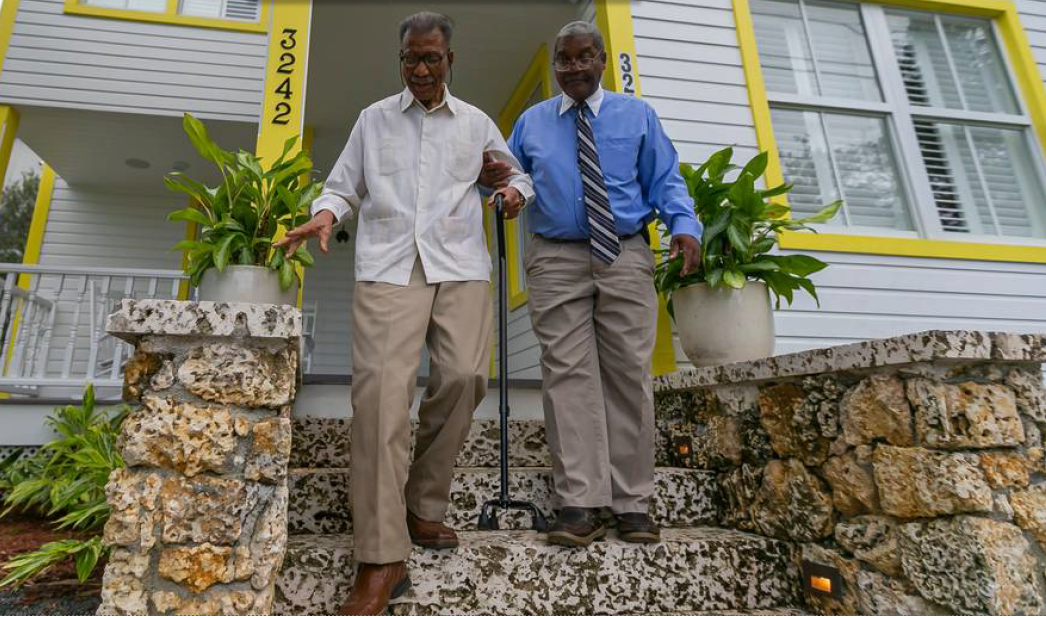 George Simpson, right, and his father, Dr. George Simpson, have restored the long vacant 1897 E.W.F. Stirrup House with the help of development partners. Now they plan to reopen the house as a bed and breakfast lodging establishment, and are also seeking a rezoning for lots they own across the street to build a companion Bahamian-style inn. MATIAS J. OCNER MOCNER@MIAMIHERALD.COM

The 1897 E.W.F. Stirrup House, one of Miami’s oldest standing homes and a once-endangered landmark in historically Black west Coconut Grove, is getting a new lease on life as part of a plan for a new Bahamas-style inn that just received an initial approval from Miami city commissioners.

The two-story wood-frame house, still owned by descendants of Bahamian-born pioneer settler Ebenezer Stirrup and recently painstakingly rebuilt, would be the historic centerpiece of what Stirrup-Simpson family members and their development partners are tentatively calling Grove Inn.

The plan has raised hope among longtime residents and activists concerned by rampant gentrification, demolition and population loss in the West Grove that people in the historic community, which predates the incorporation of Miami, can participate meaningfully in its revitalization. 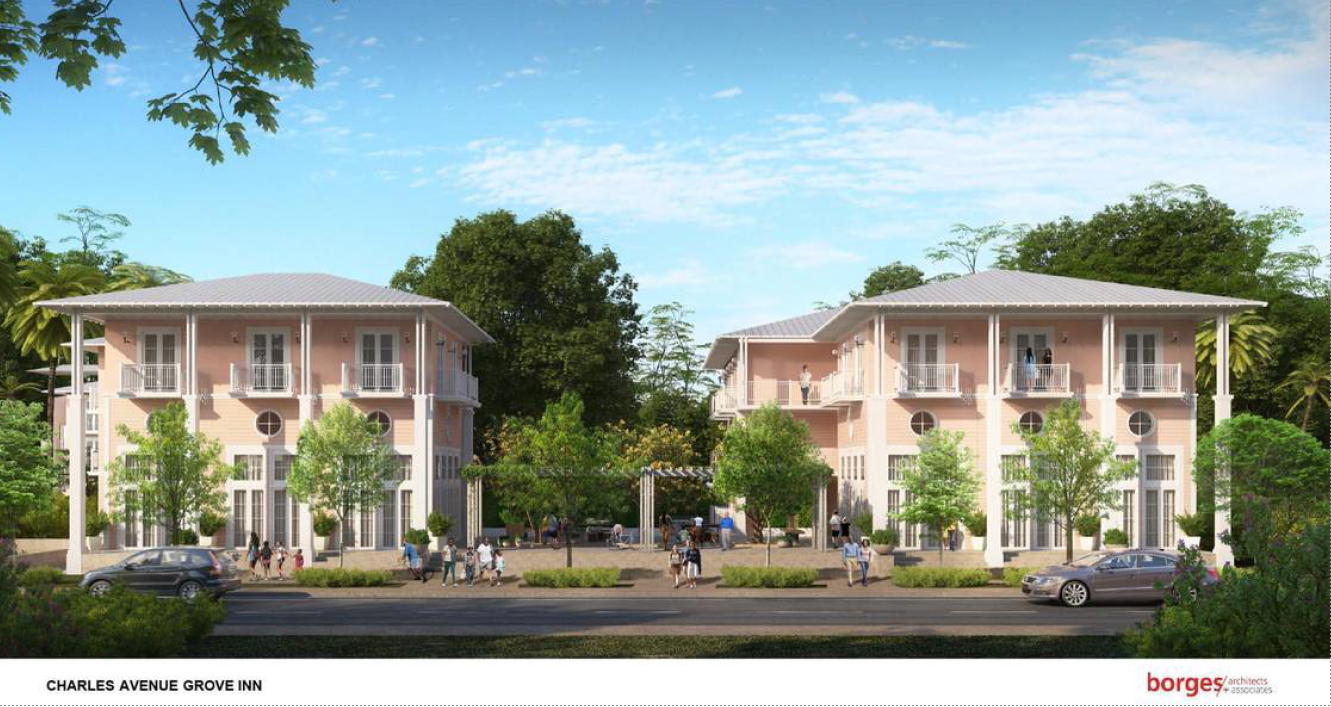 The planned inn would rise on a half-dozen lots, some long vacant, on historic Charles Avenue across from the Stirrup House and behind the long-shuttered Coconut Grove Playhouse. The lots, totaling nearly an acre, are owned individually by Simpson-Stirrup family members and Grove developer Peter Gardner, whose firm would build the inn with partner Gino Falsetto. Three existing homes would be demolished.
Separately, the project would also add a previously approved, two-story stand-alone building on the Stirrup House lot to provide more space and a kitchen for a bed-and-breakfast operation launched there last year.

The project aims to restore some of its original verve to Charles Avenue, which boasts several historically designated sites and buildings, including the Stirrup House, but today is pocked with vacant lots.

A zoning plan unanimously approved by city commissioners on Thursday contemplates three-story buildings with Caribbean-inspired architecture —required by guidelines in force in the neighborhood — and open gardens to blend with the look and feel of the historic street. Because the lots are designated for single-family homes, the commission needs to approve a rezoning to low-density commercial use. A second and final vote is expected in April.

Precise details and a final design for the inn, including the number of rooms, would come later, and would require approval by the city’s historic preservation board. The plan would prohibit residential uses and require underground parking. It also caps the number of rooms at 66 and overall height at 34 feet.

A companion agreement to the zoning plan gives priority to locals in hiring for construction and permanent jobs. It also would require the developers to make a$150,000 contribution to Rebuilding Together Miami-Dade, a well-regarded nonprofit group that helps low-income families repair and renovate their homes, for use in the West Grove.

“It’s a reputable and legitimate organization, and they do an excellent job,” said Carlos Lago, an attorney with Greenberg Traurig who represents the Stirrup-Simpson family on the rezoning application.

The family’s longtime roots in the neighborhood and extensive outreach have helped gain substantial support for the project in the often-fractious West Grove.

A handful of neighbors objected, raising concerns over the impact of increased traffic and commercial development of the street.

But the projects backers say the inn would in fact return the street to its origins. Charles Avenues historic designation applies not to buildings on it but only to the narrow roadway itself, initially an unpaved street laid out by hand by Bahamian settlers and, to this day, not fully aligned on a straight line.

Though today mostly residential, Charles Avenue was originally known as Evangelist Street for its many churches, two of which remain active. It was also the business district in the early days of the Bahamian settlement, whose residents helped build Coconut Grove and Miami. It may also be the first commercial street in Miami-Dade County.

Stirrup, who came to Miami as a young man and trained as a carpenter, built his home and had a bike shop and rooming house across the street. In the evenings after his day job, Stirrup also built more than 100 wood houses in the growing community to sell and rent to fellow Bahamian immigrants; they were joined over the years by Black settlers from upstate Florida and Georgia. The family still owns numerous properties in the neighborhood.

“I’m excited for the opportunity to bring back a little life there,” said David Porter, a family member who manages their company, Stirrup Properties, in an interview. “This was my great-grandfather’s business area.”

Under a 2017 contract with the developers, the family will retain ownership and control of the properties and participate in the redevelopment project as joint-venture partners, Porter said. Their partners and investors are working on a financing plan for the inn, he said.

The Stirrup House, which stood vacant and deteriorating for years after the last family members moved out, was substantially rebuilt as part of the deal, retaining its historic look inside and out under the supervision of Miami architect Reinaldo Borges, who will also design the inn.

Borges said he used as much as possible of the original house wood and other materials, though much of it had to be faithfully reconstructed. The original floor plan, expanded by additions over the years, has been somewhat altered. The house has been outfitted with period-appropriate furnishings. The exterior, protected by the home’s landmark designation, retains its historic look, down to the white paint and light-yellow trim.

Falsetto, whose firm built the Grove Garden condos behind the home, has a long-term lease on the property. He and his partners launched the Strirrup House as a bed-and-breakfast just as the COVID-19 pandemic hit. Business has been fitful at best, Porter said.
But Porter and family representatives say they hope the inn will help extend the resurgent prosperity of the abutting Coconut Grove village center to the West Grove.

The Black-majority neighborhood was once cut off from its majority-white neighbor by legalized segregation. Stirrup, who died a wealthy man in 1957, wasn’t even allowed to attend the Playhouse, though he leased a parking lot to the theater’s owners, family members recall.
That legacy is still felt in a neighborhood that saw little successful private investment in decades but has lately seen an influx of luxury homes occupied mostly by white and white Hispanic families.

On the same day commissioners gave the initial nod to the Grove Inn proposal, they also approved creation of a community redevelopment agency for the West Grove. The agency, long sought by residents, would direct a portion of taxes generated by new development in the neighborhood to affordable housing and other revitalization initiatives.

“We have to support a good idea when we see it,” Jihad Rashid, a longtime West Grove affordable housing developer not involved in the project, told city commissioners of the Grove Inn. “This is well conceived. If we pass on it, something worse will come along. Let’s not defer a dream that’s long overdue.”