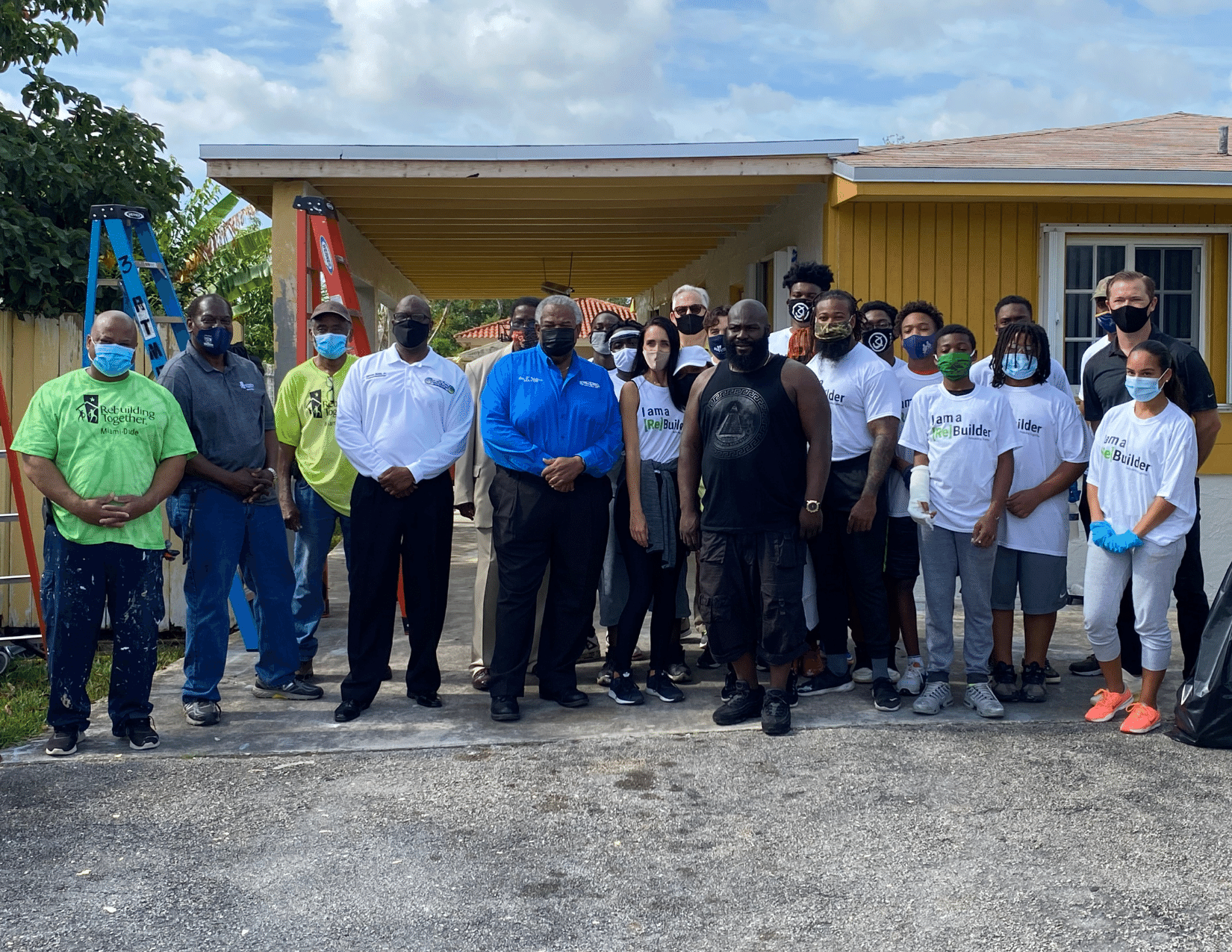 Family man Rafael Granados never hesitated to tackle hard work. Married to Dora, his childhood sweetheart, they raised five children, know-ing grandchildren would someday be a new genera-tion. No one foresaw the stroke that put him in a wheelchair and affected so much of their lives. The routine repairs he once performed to maintain their house were among things he could no longer do. Hiring external help was a financial strain and every homeowner knows how unattended problems accumulate.

The Granados were among five Florida City families who were selected by Rebuilding Together, Miami Dade (RTMD), to receive critically needed repairs and renovations to their home. In one of their exchanges, Dora expressed a common issue. “When you live on a fixed income and have limited mobility, things start piling up easily. It’s hard to see your home decay, just like it’s hard to witness the decay of someone you love. Feeling helpless about it is the worst feeling of all.”

Help was very much on the way. Although a number of projects re-quired contractor support, Saturday, April 24, 2021 was the day when more than 100 volunteers pitched in to perform exterior tasks like painting and landscaping.

Florida City Mayor Otis Wallace made the rounds to once again express support for the part-nership they formed through the Community Redevelopment Agency (CRA). “This is one of my favorite programs offered by the City. It gives the chance for people who need a hand to get a helping hand from people with good hearts. Lots of donations involved. The City is a proud sponsor. It’s a situation of all wins. Sometimes government gets involved in some-thing that really works!”

In the words of Martina Spolini, RMTD Interim Executive Director, “No home-owner should have to forgo basic home maintenance in order to afford food or medications. Unfortunately, many factors such as job loss, disability, or expensive medical bills often force homeowners to make difficult choices about how to prior-itize a limited source of income to meet life’s many demands. Rebuilding Together Miami-Dade repairs and modifies homes for Miami-Dade County’s most vulnerable home-owners. Our efforts preserve affordable home-ownership, fight gentrification, stabilize com-munities, and ensure the safety and health of residents.”

James McCants, Community Outreach Coordinator, has been with the organization for several years. “The main purpose of Rebuilding Together is to provide those things like handicapped accessible bathrooms that let people stay in their houses.” Major renovations do involve professional contractors, yet those crews may also be augmented with extra labor. “We’ve been chomp-ing at the bit to get back out to doing volunteer work with Rebuilding Together,” Mike Murphy of Costal Construction said. “We’ve got over 20 volunteers from the company here today and had many more who wanted to come out.”

Anthony Shannon, who along with his son, J.R., had been work-ing beside the volunteers said, “I’ve been on this street for over 60 years and in this house for about 30 of those. My grand-mother left me this house and if she could see it today she would be so happy. They [Rebuilding Together] did a great job in fixing my bathroom and kitchen; I’m so grateful.”
For Pablo Zavala, despite decades of farm labor and then being with Miami-Dade County Public Schools, his long battle with polio eventually led to the need for a wheelchair. After his wife survived cancer, she suffered a stroke leaving her with paralysis. Even though one of their daughters lives with them, her husband is also disabled. Bringing the house into compliance with Americans with Disabilities Act (ADA) features involved multiple projects over a period of time as well as the one-day push. “I’m grateful for any help. The kitchen and floors but especially the bathroom changes to make it so much easier for me to use,” Zavala said.

By way of a brief history, the small organization that began in Midland, Texas in 1973 as, “Christmas in April”, grew far beyond the dreams of those first volunteers who designated April as a month to help bring urgent repairs to their community. In 1988 what was now a national movement became Rebuilding Together and Frank Mackle and Joseph Myrtetus established the Miami-Dade affiliate after the destruction of Hurricane Andrew. During the past two-plus decades, Rebuilding Together Miami-Dade (RTMD) has, “rehabbed over 1,000 homes and donated over 9 million dollars in market value work to the community.”